The sound of singing in the rain music 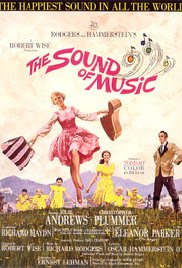 Saw these two films over the weekend. They were quite good. Great to be honest and a fine example of classic cinema. For some reason I hated musicals when I was growing up. I do not know why. I don't know if I have some strange associations with musicals and my childhood. I asked my mother if she had seen them when we were young and she said SHE had seen them a few times. So what was I doing?

In case it is not obvious what two films I am talking about, they are Singing in the Rain and The Sound of Music. The are linked just there to IMDB. Check them out on IMDB. 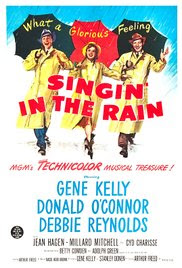 So I find it interesting, how come I never liked musicals growing up. I think it might be because I did not like the dancing. I did not appreciate songs too. Maybe when I was young I did not like films now that I think about it. I can't really remember seeing many films at home.

Look, my point is, if you have not seen these films give them a shot. Did you see them once and can't remember them? Give them a second chance. Set aside a few hours and watch it with someone. Your partner, your kids or your parent and siblings. Create something I wish I had more of from my youth. Some happy memories.
at January 23, 2017 No comments:

My favorite YouTuber is probably Philip DeFranco. Let me think about that for a moment... hmmm. Yep I guess he is, there are other people that based on how I am feeling, what I want to know about etc I will go to, but the best all rounder has to be Philip DeFranco, for me that it.

So who is yours? Take a moment. Of course you might not have one, but I am going on the assumption that if you are smart and handsome enough, and pretty enough, and brave and witty enough to be reading this article that you have subscribed to someone on YouTube or that there is some YouTube that, while you may not have subscribed to, that you are at least a fan of, Think of that person, who are they.

Will for me it is Philip DeFranco. However, his username is sxephil. Note: you are not addressing the Queen in a formal letter - this is modern speak. So his username is not Sxephil. It is sxephil. Small s at the beginning. It annoys me when people throw in capital letter because they "feel" like it. Note again: they "feel" it as opposed to they are correct about it! I have been on YouTube for a few years. I have posted a few videos, and my username is donalodomhnaill. Now, you wanna know how much money I make on YouTube?

This is finally what this article is about. There is a brilliant website called socialblade.com. Go there now in a new tab so you can come back here. So socialblade.com is for getting stats on people who are on social media. So you can find out about users on twitter, YouTube, Twitch and Instagram. Try it out, you have two usernames for YouTube already. Mine: donalodomhnaill and Philip DeFranco: sxephil.

I am going to assume that you have of course gone to socialblade and put in our usernames. See who makes more money? Me or Philip. Well, yeah. DeFranco in that I am not monetized even. And I do not have 5 million subscribers. And I go not get a million views on my videos. Indeed my figures look pretty grim.

Before you jump into this piece I have written I would like you to note that I love virtually all film. If it is inturrupted as "Donal does not like Oscars films or Action films" - then I am sorry. I did not mean for the article to come across as this. I LOVE action films, romance, Oscar films etc. I love films. This is why I have written this below.

3 THINGS ON THIS Ryan Walker. First, I have this theory. Lets say I am a movie critic. Now, I want to be known. I want to have a name for myself! A film comes out and I review it. The film is cool but touchy feely maybe with emotions and romance in it but there is also sci-fi or adventure... BOOM. I don't like it (the "I" that is the critic doesn't like it). The critic usually does not have the language to describe and critique a film that is both "this" and "this". The critic is afraid that if they describe too many different themes in a film that their audience will be lost. "What is all the political undertone you mention and the fact that the lady represents old America and that her being beaten by the business man is representative of modern capitalism destroying civilians freedoms! I only saw a woman getting smacked around the place!" New audiences are trained to only look at the facade of a film... is someone killing someone. Check. Is some lead female semi-naked. Check. Is some handsome man semi-naked, and build like a demi-god. Check. Is stuff blowing up. Check. Is there a political undertone that is attempting to reach the masses. Nope (could put it in but it would be lost on the audience and ultimately take up screen time where stuff could be blowing up). Do we treat women with respect and with equality? Nope - kids do not know what this is really so we are just risking alienating our key demographic by including equality of girls. Are ethnic minorities being respected? No of course not - us respecting ethnic minorities alienates the plot that the key demographic is comfortable with. It is what our key demographic looks for in an action film. Now, lets say that a film comes out that is pretty different to this... almost... ALMOST I SAID! Almost as if it were engineered to win Oscars, like La La Land. No explosions! And there are political undertones! And there are throwback references to classical cinema of a bygone age! What say you now of modern cinema? Ha! I say (and this Donal now not a critic speaking), I say that "La La Land" and the likes, "12 years a slave" etc etc, basically "Oscar films" will always exist because this is Hollywood karma restoring itself. Hollywood makes a few billion a year on action... Hey why not throw classical romance a bone, okay lets make a classical romance film. What about political undertone, I like it, lets make a film with political undertone! What about respecting women and treating them equally? Hmmmmm. Hmmmmm. Hmmmmm. What do you think men? Hmmm, Hmmm, Hmmm, Hmmm. You know what... it'll probably get us an Oscar! Throw in some respect of women too. So back to the critics... they have what? 200 words to describe the film? 100 words? It is clear what the Avengers is. That can be described in 100 or 200 words. "La la Land", yep 170 words will review that film no problem. But what a second, don't try to get me to review an Action/Romance/Political Undertone film! Who am I, Jay Sherman?Also, there is the thing that if 9 critics say that a film is good, and if a critic wants to be heard, are they going to be voice number 10 saying it is good? No, they want to stand out as "listen to me! My voice is different!

POINT NUMBER 3! IMDB.com simply rocks. Go there. I will leave you with my favorite piece of poetry that is relevant to this point from W .B. Yeats from his poem "September 1913" - "What need you, being come to sense, But fumble in a greasy till And add the halfpence to the pence And prayer to shivering prayer, until You have dried the marrow from the bone; For men were born to pray and save: "
at January 09, 2017 No comments:

Get Google Play Store working on your Amazon Fire

What is an Amazon Fire? Well first of all what is Google Android?

Android, as most of you realistically know, is the operating system that is distributed by Google. Android enables the user to interact with the physical hardware of the machine that you are using. Have a Samsung Galaxy? Odds are that it is running Android. However without Android you would have alot of expensive computer equipment just sitting like a brick. Android tell the computer what to do, and lets the user browse, take pics with the camera, Skype etc etc. 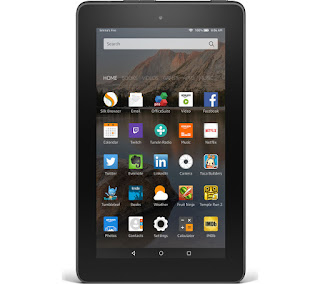 So what is the Amazon Fire? Like the previously mentioned Samsung Galaxy, the Fire is a piece of hardware that would sit uselessly like a brick unless it had some software to run it. It needs an operating system of course, and the operating system that it uses is Google Android. But it is not a "vanilla" install of Android, it is a pretty modified version of Android that Amazon call - "Fire".

So, my cousin came over with an Amazon Fire that they had just gotten that day as a present and they were wondering why they could not install Google Android apps on it, When I heard the problem I told them about the who Android / Fire thing and I got to work.

First I went over to http://rootjunkysdl.com/files/ where I selected Amazon Fire 5th Gen from the list of links. Here I downloaded the zip file named "Amazon-Fire-5th-Gen-Install-Play-Store.zip".

Next, while that was downloading I went into setting on the ADB Fire and I sound the Serial Number and I clicked on it more that seven times in a row, this simply enables the Developer menu. I went into the developer menu and I enable ADB (Android Debugging Bridge - lets you in this case connect the Amazon Fire to the computer).

Then I unzipped the file I had just downloaded, I ran the one and only .bat file that was in the zipped folder and when I was presented with a menu I selected "2" to install Google Play store.

Along the way you might have to agree with various thing both on and off the device, but you are doing something here that essentially Amazon does not want you to be doing, so you have going to have to agree with some thing outside of your expectation, however nothing bad was forced upon me anyway when I was doing this.

I rebooted the device, and scrolled down the page, and boom, Google Play Store. Thanks to howtogeek for help for this.