Scientists invent the lightest thing ever....

Boffins have invented this "ultralight metallic microlattice," 100 times lighter than styrofoam. While there is no actual specific use for it yet... its worth it for the picture alone is it not?

http://latimesblogs.latimes.com/technology/2011/11/lightest-material-on-earth.html?track=lat-pick
at November 21, 2011 No comments:

A picture of a warsaw ghetto

I came across this picture just now. On my iGoogle home page I have 'what happened in this day in history' gadget.... So on this day:

"Nazis imprison 380,000 people in the Warsaw Ghetto." It is accompanied with the following picture... 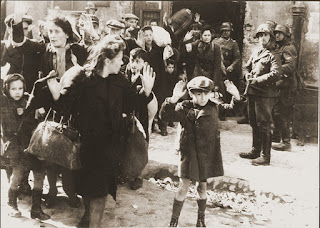 It is a very telling image. I can say nothing that has not been said before of course, but what sticks out for me in this image are the kids. As my kids get older I realise what they understand at certain ages. And more importantly what they do not. Sure, a kid in this picture would understand that the soilders with guns meant bad news and that they (the kids) should just do what their parents were doing. But they do not understand the bigger picture.

It is just a really sorry image. A brilliant picture that tells a terrible story. A story that should have finished 60 years ago but never did...
at November 16, 2011 No comments:

Most Advanced Robot - I love you Asimo

Wow, look at this, it is fantastic and makes me actually happy to see it, he makes me smile - he is so amazing. Look at Asimo here running, hopping on one foot, and carefully opening a flask of juice and pouring it out. Brilliant and cute!

Asimo is a robot (well a series of robots really) that Honda have been working on for a few years. This video shows the latest that this amazing little robot can do...

Call my brother who lives in the delta quaderant! Now thats gonna be a phone number... but I hope we have skype.. otherwise the bill is going to astronomical!
at November 11, 2011 No comments:

Hey blogger has changed its interface a good bit. I don't know if it looks different when the blog is published but from my side, where I am writing the blog it looks pretty cool! It told me that for example, my blog has had 4998 hits! Cool.. you are probably reader number 5000+. Nice....

Friday morning, I am feeling awake because last night before going to bed nice and early I did a good 20 to 25 minutes of exercise and had a shower. All that equates to a good nights sleep.

On the radio this morning I heard the piece of music, I was listening to Lyric FM by the way.... it is from Shostakovich - Jazz Suite No. 2. Here is the link:

Depending on how much of a Stanley Kubrick fan you are you might primarily know it from his (what I now call good film when referneced from my minds eye) 1999 film "Eyes Wide Shut".The youtube link I have provided here shows fighter planes flying and blowing stuff up. But look at the planes, beautiful.  The footage is not the best, but still cool.