Her Majesty the Queen Elizibeth II came to Ireland today. I don't know if she ever stepped foot on offically Irish soil before. What I find, did find in the past, and will find in the future, annoying is people that give out about the Queen. If I came across someone who hated a country and because of the hatred to that country never bought their produce, never supported them in any way, didn't sing their songs, but still knew their history, I would respect their opinion to hate them. I would not hate them myself becuase of their opinion, I make up my own mind (and I believe that hating anything or anyone makes no sense). 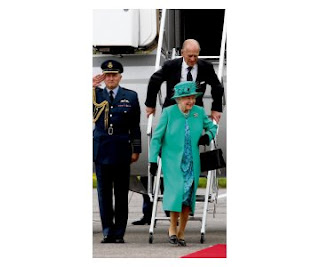 So you have the "Anglo-Irish" situation. The Queen visited to bridge relations between the two countries. Definately there have been bad days in our history. But at this state in the relationship it tiresome to hear people protesting about the whole thing. And I know that Irish people still have strong emotions about the death of family members caused by the English government, but are you going to hold onto this forever? Are you ever going to say, "we still await an appology - but we will welcome the Queen". If not why not? Well what are you doing sitting on your ass then? Go an do something about your missing apology - do it and get over it.

I might sound ignorant here but I do not care. I have children and the moment they do not know hate. But they will learn of it eventually. And myself and Linda will teach them that hate is not good and it only hurts those who harbour it. Please, if and when they do learn it, let it not be from my own country people. Is that your aim? To hate the English monarchy so much that you will chew up and blacken the souls of the young so that they too will not live, but exist in that erie twilight of ignorance and fear that hate breeds? Thats worse than anything Queen Elizzibeth ever did to me....
at May 18, 2011